The overnor of Lagos State, Babajide Sanwo-Olu has announced his intention to repeal the Public Office Holder (Payment of Pension Law 2007), which provides for payment of pension and other entitlements to former Governors and their Deputies in the state.

Sanwo-olu disclosed this on Tuesday during the presentation of the 2021 budget.

Sanwo-olu, who said the bill would be sent to the Lagos Assembly for legislative approval, stressed that the abolition of pension for former governors and deputies will reduce the cost of governance. 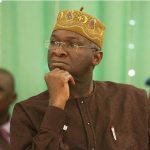