Just today, the Kaduna State Government promoted the Sa Gbagyi of the Gbagyi chiefdom in Kaduna State to 1st class king in a press release issued the state government.
It was stated that the reason for the promotion is because of the effort Sa Gbagyi put in, in ensuring peace in  Kaduna state in just the last religious crisis some weeks back. About three weeks ago, the Kaduna State Governor addressed the Sa Gbagyi as Chief of Chikun while addresing the public which didn’t go well with the Gbagyi nations.
Today again in the press release that announced the promotion of Sa Gbagyi to first class king, it was stated that the Sa Gbagyi will now be addressed as Chief of Chikun and this has caused reactions from the people of Gbagyi and the general public. The Gbagyi nations have shown disapproval to the change of nomenclature of the Gbagyi chiefdom and the ruler. See the different reactions below:
Firstly read an article Kajit JP


Credit has to be given to His Excellency Governor El-Rufai for his ideological and policy consistency. He is boldly re-writing, or better still, rejuvenating an original colonial policy for ‘Northern Nigeria’ as intended Lugard, the Colonial Office and subsequent officers. That policy was pursued vigorously pre and post-independence ‘Northern Leaders’ quite brilliantly, and defended/advanced before the Willink Commission during its sittings in 1957 and 1958. But the rise of human rights and equality consciousness has weakened that policy approach in shaping ‘Northern Nigeria’.


The Willink Commission was clear in its definition of the ‘Northern System’ at pages 52-53 of the report as founded on Islam, Hausa language, ‘ruling tribes’ of Fulani, Kanuri, Hausa and Nupe, and the Emirate system. It is a definition aimed at gradually assimilating all the diverse indigenous Ethnic Groups into Islam as a religion, and into Hausa culture and language for the main part. The objective was to forge a homogenous ‘North’ and avoid conflict etc. There were protests and even riots against it across the Middle-Belt, but it was most pronounced in Tiv areas from the 1920s (and beyond) as captured the Frazer Report on Northern Education of 1926 (a report which the Northern British colonial officers did everything to bury).


Furthermore, the aim is to forge a homogenous Northern Nigeria based on Fulani rulership using the Emirate System as the mainstream, dominant ‘traditional’ system. Hausa is designated Lingua Franca (designed Lugard as stated in his 1918 Report, and Islam as official religion.


Governor Nasiru El-Rufai represents a confident revival and vigorous pursuit of that policy framework. Lugard would love El-Rufai, even though that framework will fall far short of human rights and dignity standards worldwide. Ahmed Makarfi being himself a Hausa man whose people struggled against Emirate oppression as he often states, is the anti-thesis here as evident from his policies as Governor.


So you have to give credit to El-Rufai for his courage, consistency and drive to revive and implement an original ‘colonial blueprint’. Whether this scheme will succeed or not depends on variables. I say this because dominant Western consciousness tends to designate Nigeria as a Muslim country going into the future. You find a distinguished scholar and writer like Samuel Huntington thinking that Nigeria could hold UN Security Council veto powers and permanent seat on behalf of the over 1.5 billion Muslims of the world. Religion thus becomes a tool for politics rather than a matter of private conviction based on freewill and belief.


On the other hand, global leanings toward recognising diversity and forging constitutional orders based on recognition of, respect and protection of that reality is indeed a growing trend. By the way, once ‘Northern Nigeria’ is homogenised eliminating the diversity and autonomy of entities in the Middle-Belt, ‘Southern Nigeria’ becomes easy pick. In all his speeches, Governor El-Rufai speaks straight. He did so long before becoming Governor.


It is a clash of ideologies, and the destination would have to be in the hands of the various actors.


I had ended this piece as a draft when news emerged that the Governor had just ‘elevated’ the GBAGYI chief to 1st class, and renamed him ‘Etsu Chukun’, thus removing much of GBAGYI ancestral territory from his domain today 05 November 2018. So I added the following addendum:


This comes today. The governor renames the GBAGYI chief ‘Etsu Chukun’, thus effectively cutting off GBAGYI land outside Chukun LGA. He is giving the rest (from Jaji to Kaduna South) to any possible Emirs he could create: possibly Emirs of different towns. This could be extended to towns like Zangon Kataf, Ladduga etc.


With these defiant steps, El-Rufai is setting-up a Pandora box, such that even if he loses his re-election bid, he would have created the basis for future bloodshed.


Hear hear as Samuel Aruwan speaks for his Boss:

Malam Nasir El-Rufai has approved the elevation of HRH Dr. Danjuma Barde, the Esu Chikun (previously known as Sa Gbagyi), to a first-class chief. HRH Dr. Barde was appointed Sa Gbagyi on 29th December 2000 and installed on 18th January 2001, as a third-class chief. He was upgraded to a second-class chief in 2007.

Congratulating the chief on his elevation, Malam Nasir El-Rufai said that “HRH Dr. Barde deserves this exceptional recognition for his role in promoting peace.” The decision to upgrade the Chikun Chiefdom to first-class status follows a recommendation to that effect the Ministry of Local Government Affairs. The ministry, in a proposal signed the commissioner Prof. Kabir Mato, noted HRH Dr. Barde’s contribution to peace and his active role as a bridge-builder among the ethnic groups in the chiefdom, a fact the government recently acknowledged in a letter of commendation to the chief.

Prof. Mato also drew attention to the fact that much of HRH Dr. Barde’s chiefdom is within Kaduna metropolis, noting that the chief has been able to promote integration among the diverse population of the chiefdom, which covers the entire Chikun local government area of the state. The ministry therefore recommended that he be elevated, to recognise his efforts, and to encourage people who make peace and harmony a priority.

The name of the chiefdom was recently changed from Gbagyi to Chikun chiefdom to reflect government policy that anchors the authority of traditional leaders on territory, not tribe. This is to ensure that the traditional rulers include and command the allegiance of every group within the territory, rather than just the people with whom the ruler shares a common ethnicity.

HRH Dr. Barde holds a degree in Education and has worked as a teacher and chief education officer. He is also a former member of the Kaduna State House of Assembly.


In this way, His Excellency Mallam Nasiru Ahmed El-Rufai demonstrates his consistency and doggedness. While he is bold and blunt in this pursuit, he garnishes his implementation process to mask the identity exterminatory principle behind the whole scheme.


Such a spectacle to disguise ancestral territorial theft as elevation to 1st class status!
A Better World is Attainable!
Kajit JP is a public affairs analyst.”


Read other reactions below:

Governor Kashim Shettima on Friday evening held an emergency security meeting that was attended Heads of the Nigerian Army, Air Force, Police and the Department of State Security 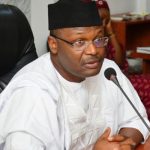 INEC records over 1,689 law suits from the 2019 general elections