Governor Nasir El-Rufai’s spokesman,
Samuel Aruwan said that government upholds religious freedom and all
constitutional rights of every resident to practice the religion of
their choice.

According
to him, government did not and cannot ban any religion, but has a duty
to declare unlawful any group that threatens the peace and security of
the state.
The
released gazette reads in part: “Kaduna State Gazette No. 21 of 7th
October 2016 has declared the IMN an unlawful society. The The Judicial
Commission of Inquiry into the clashes between the group with the
appellation Islamic Movement in Nigeria (IMN) and the Nigerian Army in
Zaria between Saturday 12th and Monday 14th December 2015, found as
facts inter alia that: The Islamic Movement in Nigeria is an
unregistered society and recommended that immediate steps be taken by
the Kaduna State Government to proscribe it.”

He
however stressed that their  actions will never be permitted under any guise;
urging citizens to report illegal actions or suspicious activities
to the security agencies and not take law into their hands for such is wrong. 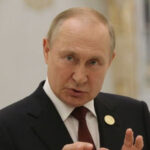 #war: ‘Nobody among us shoots just like that’- Putin denies responsibility for missile attack on Ukranian shopping mall that killed 18 and injured hundreds