Today being
Nov. 7th, 2016 President Buhari has visited the Benin monarch, Oba Ewuare the second,
at his palace, after arriving Benin City, the Edo state capital , for a two-day working visit.

Several social medias have reported that this would mark the President’s first visit to the
monarch’s palace since his coronation as the Oba of Benin kingdom on
October 20, 2016. Oba Ewurare has however, upon the president’s arrival,
appealed to him to create a sea port in the state…

The president has also commissioned
some key projects carried out the state governor, Adams Oshiomhole.
The projects include; the newly constructed central hospital, the siluko
road as well as the gully erosion reclamation project, at the Queen Ede
Agbor road, and the New Era Secondary School now renamed Samuel
Ogbemudia Secondary School.

Popular Suspected Badoo kingpin, Abayomi Alaka, speaks out from his hideout, alleges police is after him because he refused to give N10m bribe

Woman jailed because she had a still birth 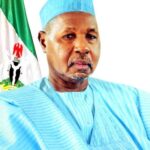