Reports got to us that about  three Fulani herdsmen have been killed some unknown gunmen in Southern Kaduna. Some say these gun men are from Southern Kaduna and they are doing it in retaliation of past killings Fulani herdsmen.
According to residents of the area, the gunmen killed two Fulani herdsmen at Unguwan Maiyashi village in Jemaa Local Government of the State while another one was killed at Madakiya community of Zangon Kataf LGA, both in southern Kaduna, Saturday March 11th.Confirming the incident, the state police command spokesperson, Aliyu Usman, said the remains of the herdsmen were this monday morning traced to a river. Aliyu also said some arrests have been made in connection with the incident.
Details coming later…. 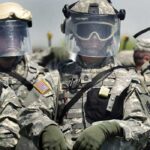