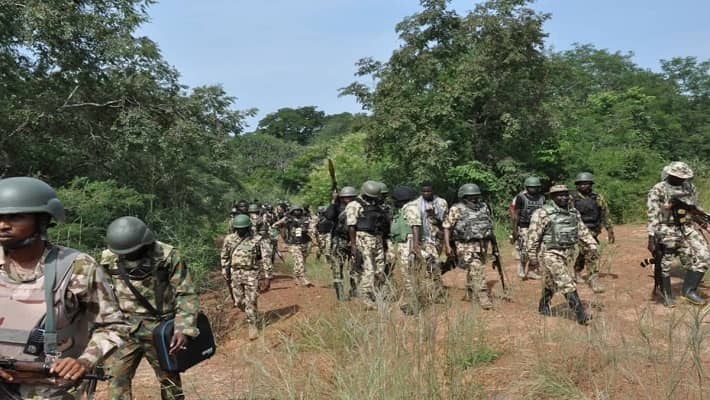 Troops of the Nigerian Army have killed unspecified number of terrorists, during an attempt to lay ambush for the security operatives stationed in Sarkin Pawa, the headquarters of Munya Local Government of Niger State

According to report gathered the gunmen in the early hours of Monday at 2:15am, attempted to attack the security men who then engaged them in a fire exchange for over two hours.

It was also learnt that the terrorists stormed the area in their hundreds and met the soldiers on alert even at that late hour of the night.

The Spokesperson, Coalition of Shiroro Associations (COSA), Salis M Sabo Esq, while, confirming the development, said the terrorists came in hundreds trying to dislodge the military base, but the security personnel engaged them in a gun duel which lasted for about 2 hours until the military called for reinforcement and successfully neutralized them.

“Terrorists invaded the military camp in Sarkin Pawa, Munya Local Government of Niger State and unfortunately for the terrorists, the gallant soldiers were on alert even at that late hour of the night,” he stated.

According to him,” it took the military less than 30 minutes to arrive Sarkin Pawa from Minna in response to the distress call for reinforcement.

The energy and passion our security men are exerting recently, in the fight against terrorists in our locality, is unprecedented and has restored hope in the mind of the people”.

“Bythe report at our disposal, there are no casualties on the side of the military”.

Sabo, however, disclosed that there is a strong indication that some terrorists were gunned down, although the number is yet to be ascertained.

The State Commissioner for Internal Security, Emmanuel Bagna Umar also confirmed the attack, saying the military dealt with the gunmen.

“The military personnel were able to repel the terrorists and there are no casualties on the side of both the military and the civilians. But, I cannot ascertain the number of gunmen neutralized bythe soldiers, “the commissioner added.

Popular gospel singer, Tope has lost her mother who died at the age of 70.

Eugene Cernan, who was the last man to set foot on the moon died at the age of 82