Today Sunday 23rd of April, at SPEAK put together   Bamikole on Ground Zero platform in Suleja, E-Daniels disclosed unofficially the date for his album release.
He was together with Jared Daniel his brother and interviewed Papasam. When E-Daniels was asked about his album lunch and dedication he said the official lunch will be at Hope Alive in Abuja  on the 21st of May 2017 because a media house in Abuja is putting it together while the Suleja album lunch will be on 4th June 2017. Though earlier on he said he will disclose every details concerning the album release via his social media handles. He also said he will be having a church tour after the album lunch and there after he will go back to school.
When asked if he falls in love he said yes but he is presently not in a love or romantic relationship.

onye Igbo may not be president of Nigeria again – MASSOB 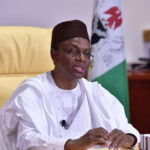 I am frustrated in my state, we are called chief security officers only in name – Governor Nasir El-Rufai speaks on killings and insecurity