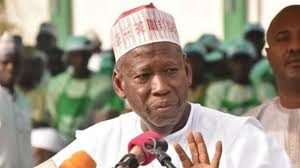 The governor had signed a bill into law on Wednesday, May 8 which created additional first class emirates.

The move has been perceived as an attempt Governor Ganduje to reduce the power of Emir Lamido Sanusi and curb his influence.

According to Premium Times, two members of the House of Representatives in Kano on the platform of the Peoples Democratic Party said they received a court order on Friday, May 10 against the new emirates.

The lawmakers said the “House was not properly convened before the law was hurriedly passed on Wednesday.”

Meanwhile, a former deputy national publicity secretary of the All Progressives Congress (APC), Comrade Timi Frank berated the Governor for the recent bill he signed, describing it as a ploy to destroy a traditional institution which has been in existence since 1805.

Comrade Frank specifically accused the governor of signing a political vendetta bill which he said is aimed at making the Kano Emirate under Emir Sanusi irrelevant.

In a statement sent to Legit.ng on Friday, May 10, Comrade Frank said it is gradually becoming the policy of the APC administration to clamp down on traditional rulers.

He made references to similar occurrences in Oyo and Kaduna states.

Music Alert: Most anticipated song is out. Download Flame of Fire Sheq-Dee